You are here: Home / Diabetes / The ineffectiveness of the HbA1c test when a patient has active inflammation 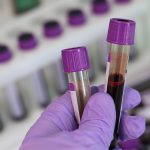 As I mentioned in my last blog post, I went undiagnosed for a long time as a diabetic due to having normal HbA1c readings. However I also have rheumatoid arthritis, which wasn’t in remission at the time, so I had active inflammation, which in turn meant that the HbA1c test results could not be correct. Here’s why:

Haemoglobin, the iron-containing protein found in red blood cells that transports oxygen, becomes bonded with glucose in the bloodstream. This bonding is called glycation, and this process forms harmful new molecules called advanced glycation end products, or AGEs for short, which is apt since they cause, among many other things, cell dysfunction, blood vessel stiffness and damage to the collagen and elastin in the skin, producing the effects we associate with ageing.

How does the HbA1c test work?

The HbA1c test measures the amount of glycated haemoglobin in the blood. Red cells normally live in the body for about 3 months and the HbA1c test reflects a person’s blood sugar levels for about the past 2 to 3 months. So, if you are anaemic and don’t have sufficient haemoglobin, or are inflamed, and so the red cells are not living as long as they should, then the HbA1c test cannot produce a true assessment of recent blood sugar levels. Picture this, the HbA1c result gives a reading based on the glycation created over 3 months, now imagine your red blood cells are only actually living for 6 weeks (just a random figure for illustrative purposes), in that case, the amount of glycation could be double the actual test result given, meaning that blood sugar levels were much higher than the test indicated.

If you have any inflammatory disease, such as cancer, kidney disease or autoimmune diseases, or you are anaemic, and you’ve been told you’re not diabetic based on a normal HbA1c reading, even though you suspect you have diabetes, then you need to get rechecked using a fructosamine test. The fructosamine test gives a result based on the last 3 weeks rather than 3 months and is much more likely to be accurate for people whose red cells are dying off faster than normal.

Despite the inaccuracy of the HbA1c test in my case, doctors have continued to give me one regularly and when compared to the fructosamine tests, my endocrinologist noticed that as my inflammation came under control then the test results from the HbA1c and fructosamine tests became more in line with each other.